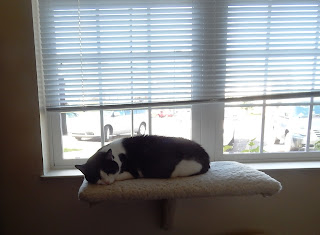 Oh Mario, so glad you enjoying your new digs. And you have a nice window to look out and keep track of the Peeps. You all have a great day.

Mario, mom and I LOVE you to bits! We sure do.

I am sure glad to see you have a great lookout spot Mario!

My paws are crossed that you only get drills, and never the real thing!

I'm so glad you're settling in and making yourself at home, Mario!

That's a pawsome spot, Mario. We're glad to hear you are getting used to your new place.

I am sure you and your folks miss your house, but I am glad you are adjusting.

Mario you have the PURRFECT spot to watch for your humans! Did you know that I live in an apt/condo building? Yep! I do! My Grandpa Bobo also lived in an apt and he was able to see my Mom come and go like you can. I am on second floor and sometimes Mom and Dad trick me and come in where I can't see them.
That sounds like a nice, safe place to live, that is good that they have drills like that to keep you all safe!
Love, Cody and Mom
catchatwithcarenandcody

Practice is good, and so is a place ta go. We have a good place ta go in the basement unner the stairs and against the foundation wall where the cement steps are outside. But when there is anny sudden stuff, we just vanish fer an hour, so TBT says it would be really unlikely he could get us into PTUs in an emergency...

Great spot! Mario, we're happy you're settling in so well!

Mario, that is a pawfect spot fur a kitty. I am a dog but I live with a big orange cat who loves to look out the window.
So happy to have found your blog. I am now following you.
From Vancouver,
Louis Dog Armstrong

Mario, We are glad you have found an amenable and comfy spot in your new home.
Tornados sound really scary. It is impawtant to purr-actice so as to know exactly what to do and where to go if one of them effur blows your way (which We hope it neffur will).

We're glad you found a good spot to keep an eye on your peeps! Tornado drills don't sound like fun but we're glad they're just drills and not the real thing. We don't have tornadoes here so we have no clue what they're like but our Mommy and Daddy are from Kansas and they say they're scary! Hope you have a great weekend!

Mario, you got a great window perch!! I think you'll grow to really like your new apartment. I may be about the size of mine and I love running back and forth from one end of the other. I don't get too tired out. I hope you never have one of those tornado things.

Dear Mario, I'm glad to see your M and D kept your Bird & Squirrel cable service intact! So furry important when other stuff changes to have your comfy stuff around you. Hugs and purrs to you and yours.

pee ess: Sometimes we just get struck by the zoomies. Just enjoy them!

Tornadoes sound a bit scary! The Staff says I'm a bit like a tornado when I get the zoomies MOL! Glad you are settling in, buddy! :-)

Mario that looks like a great spot to get just the right view from. Wow we hope you don't have ANY tornadoes, but we are glad you'll be safe and sound if by chance one comes your way.

We didn't know you live where you have to have Tornado drills. We're glad the drill went well. And we love your spot.

That's a fantastic napping spot!! We would love it for bird watching! Purrs from the Zee/Zoey gang

Basil and The B Team ~ BionicBasil ® said...

Mario dude, that is one fine snoozing perch mew have there!

That's a great idea, having a Tornado Drill. We get Tornadoes every year here, and while the wind is whipping and the sirens are blaring, I watch my mom run around grabbing kitties to stick inside cages under the staircase. It's the only room in the house she thinks is more than moderately safe. I don't like any of this Tornado stuff. I think we should vote not to have them. Who's with me? *raises paw*

Mario, that is a wonderful place to nap! Our windows won't accommodate one of those. :-( You're one lucky guy!

Hopefully you never have to go in the windowless room for real. My mom spent a few years in Wisconsin and remembers the tornado warnings. We prefer California where things might get a little shaky for a few seconds.

It's wonderful that you have such a large perch in front of that big window. You can roll around and not worry about falling off.

Hi Mario, We can see that you are getting used to your new home and your cat tree is in the perfect spot for watching da birdies.

Glad to hear you can take the tornado drill as a matter of fact thing. Hope you never experience a tornado though!

lots of purrs from us,

Glad you still have some running room. Got to have room to exercise.

having a mom who knows what to do when things get tricky is very important to keeping you safe.

Hey Mario!
Glad yous liking apartment living. And a tornado! Wow! Mes hopes yous don't gets one of those!
Mes loves my little apartment. Now that mes blind in one eye and can hardly see out the other, am getting deaf and can't climb or jump very far, it is purrfect! Everything is always in its place and me mes has designated sun puddles.
Kisses
Nellie

That looks like a comfortable spot for keeping an eye on everything and everyone.