Helping A Friend In Need

As most of our twitter pals know, our dear friend @PierreThePoodle is going through some pretty serious health problems. He needs to have more tests done, but it's getting tough for his mom to pay the mounting vet bills. (M says she can really relate to that because of my toothie problems - vet bills can be enormous).

Our Wonderful human angel (@DanaPixie), keeper of the #pawcircle, and very good friend to all us anipals, has set up a chip-in to help Pierre's mom pay those bills. I'm not going to go into all his health problems here, but instead ask you to go to the page @DanaPixie has set and read all about his health there. If you can contribute, it will be greatly appreciated. No amount is too small - it all adds up.  I have also set up the chip-in widget in this blog for convenience of those readers who already know the health issues.

Here's the link to @DanaPixie's chip-in with an explanation regarding Pierre's health issues.  I will say though that Pierre has been feeling pretty good since he started meds, but the problem is not solved and the vet would like to do more tests to get to the source of the problem.  We want Pierre to continue to do well and get the tests he needs so he will be healthy again.
http://helpchili.chipin.com/pierrethepoodle

If you are on Twitter, you can also help out by RTing any tweets you see. And please keep Pierre in your thoughts and prayers. If you are a kitty, you can give healing purrs too.

Email ThisBlogThis!Share to TwitterShare to FacebookShare to Pinterest
Labels: PierreThePoodle 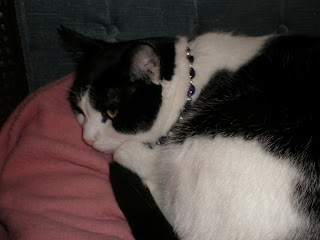 Take a good look at my neck please!   Isn't dat a great collar.   At the December Pawpawty I won this cool prize given by @MizzBassie.   It even arrived before Christmas.  It was like getting a Catmouse prezzie, only it wasn't.   Isn't this the most bootiful collar ever?

I'm wearing it for the winter season, cuz I'm not going outside now, so don't need my heavy duty collar with ID tags.  I will have to switch back to my regular collar when spring comes - if it ever comes.

They always have such fun quizzes at pawparties and it's so much fun trying to win a prize.   If you have never participated in the pawpawty quizzes, you really should try it sometime.  It's fun, and you never know if you'll win something.  And, if you've never been to a #pawpawty on Twitter, you don't know what fun you are missing.   Besides having all the fun, we raise money for a pre-selected animal shelter each month.  Now who can possibly resist going to a pawpawty - help shelter anipals, have a whole lot of fun, win neat prizes, and meet all kinds of great new pals.

MizzBassie has lots of collars featured in her bloggy.   Please go over there and take a look.  She does pawsome work.   http://www.silkenpaw.net/cats/mizzbassie  I'm sure she'll offer another collar as a prize at our January #pawpawty next weekend, which just happens to be #Dudefest.

Email ThisBlogThis!Share to TwitterShare to FacebookShare to Pinterest
Labels: Collar from MizzBassie 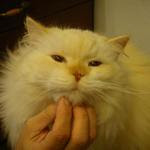 PiruloFurry
1/11/11
Hi Pals,
I is very sad because another good buddy, @PiruloFurry, crossed the rainbow bridge suddenly yesterday.   Pirulo was only 8 1/2 years old, and they think he had a heart attack during the night Monday evening.  He was fine when the family went to bed, but didn't wake up the next morning.  We are numb here and still in shock after hearing the news yesterday afternoon.   Such a bootiful boy, who left us way before his time.  Our hearts go out to his family and to "The Other One," as Pirulo called the lady upstairs, whom he visited daily.   They are heart broken, as we are.
Please take a minute to go over to Pirulo's bloggy and post a message.   It will bring some peace and comfort to his grieving family and friend, "the other one."
http://pirulofurry.blogspot.com/2011/01/piru-died-today.html
So, part of me is still feeling very sad, but part of me is feeling happy because of some other good news:
Happy Part - As most of you know our pals in Australia are going through terrible flooding.  Our hearts have been very heavy worrying about our pals over there (so far all of the ones I personally know are present and accounted for and have escaped damage, thankfully).   But, many anipals have not been that fortunate.   Some have been rescued and turned over to shelters, others have not had that good fortune.
My friend @Dashkitten posted a blog today that is a very good read.   First, there is a video clip of a BBC weather station that is running a video explaining why all this is happening to Australia.   It's the first time we have heard a sensible explanation to such a disaster.   The second part of her blog is what made me feel HAPPY.   Dash lists the site where we can go in and help by donating whatever we can afford to help all the anipals that have been rescued.  They needs to buy lots of food, supplies, etc.   So, every little bit helps.
http://dashkitten.blogspot.com/2011/01/tap-tap-looks-for-computer-notebook-and.html
Dashkitten just posted a new post, so be sure to read the current one, then go over to the AnipalTimes and read her article published there.  She provides the link in her blog.
Our thoughts and prayers go out to all the oomans and anipals in Australia.  May this flooding end soon.  To give you an idea how big the area is that is flooded, M read an article yesterday dat compared it to an area twice the size as the state of Texas.   That's HUGE.
Thanks for visiting Pirulo's blog and Dash's blog.   Next time we hopes we has all happy news.
Mario
Posted by Mariodacat at 3:09 PM 21 comments:

The Newest Star in the OTRB Galaxy 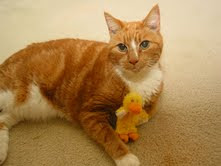 Mulder_Cat
Hi Pals,
Twitterverse lost another dear pal yesterday - @Mulder_Cat, age 15 (I believe) , a good friend to so many of us.  Mulder bravely lost a battle with Cancer, even tho his Staffpurrson (as Mulder called his ooman) spared no expense over the past year in an effort to save him.  It just wasn't meant to be.
Another very dear friend, @PumpkinPuddy, posted a beautiful blog today about Mulder.   As my tribute to Mulder, I'd like to refer you to Pumpkin's blog as she did a excellent job.   I could not have said it any better den Pumpkim did.    http://pumpkinpuddy.blogspot.com/ I do hope you will go over to see it.  There is also a link to Mulder's favorite charity should you wish to make a donation in Mulder's name.
@PepiSmartDog does a fabulous job of escorting the new arrivals across dat bridge.   We know Mulder is at peace now, has no pain, and is happy.  In fact, he was even racing Pepi's pram there for a time, determined to beat Pepi across that bridge.  he he - and he was even tweeting as he was crossing.  You see Mulder has a tremendous sense of humor.  Always full of wit, and you could never outsmart dat guy.
Mulder is survived by his wonderful sisfur @Scully_Cat and his ooman @Staffpurrson, who will greatly miss him, but are at peace knowing Mulder will have no more pain, and won't get poked and prodded with anymore needles or treatments.  @Staffpurrson did everything Mulder's doctors recommended, catered to Mulder's every need, and worried and fretted over Mulder & Scully.  No other ooman could have done a better job in caring for Mulder.  I know Mulder was deeply loved by Staff, as he was by so many of us.
I'm going to think of Mulder as our newest shinning star in the heavens, so I can look up there nightly and see him twinkling down on us.   Mulder was given his angel wings too, but typical Mulder fashion, he was already yelling "Get those sissy things off me right NOW" - as they were being pinned on him.  he he - this is how I envision Mulder now - well at least just before he ripped off the angel wings: 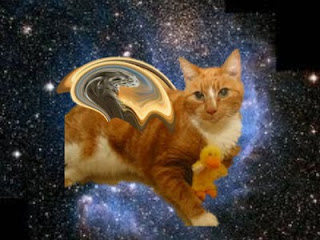 Next week on Thursday, January 13th, please join us at the #nipclub when we pay special tribute to Mulder.  Details of the event can be seen here:   http://nipclub.blogspot.com/  Since Mulder was not one to miss a pawty (and this one's theme will be the X-Files), I suspect he'll show up - well, he'd better show up!  (It's better not to beat around the bush with Mulder.  he he)  I'll have a special Meowgarita ready for you pal.
We're so happy you managed to swipe Staff's gizmo so you can still tweet to us.  Of course we'll enjoy talking with Scully, but she probably isn't the wise... dat you are!
I'll be waving at you every night pal.
Love you buddy,
Mario
﻿
Posted by Mariodacat at 5:02 PM 21 comments:

Email ThisBlogThis!Share to TwitterShare to FacebookShare to Pinterest
Labels: Mulder_Cat

﻿Hi Pals,
It seems like all my blogging pals are making rezalutions, so I suppose I needs to make one too.  But  - what is a rezalution?
﻿Well, M sent me to dat big fat book called a dictionary again.   It said:
"a resolve or determination: to make a firm resolution to do something."
HUH!
Okay, I rezolve not to make a rezalution and do what I do best - nap! 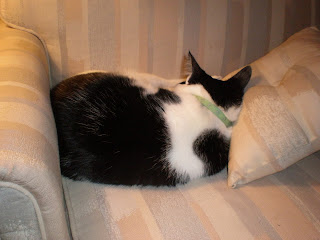 ﻿Happy New Year Pals
We hope you and your family have a great 2011 and dat everyone stays healthy.
﻿Mario
Posted by Mariodacat at 6:20 AM 18 comments: