This is Mario’s mom reporting today.

@PeroDaCat’s mama is scheduled to move to an Assisted Living Facility in Arizona March 1st.  Much to her sadness, she has to find a home for 3 of her 4 dear kitties. The Assisted Living facility will only allow her to bring one kitty with her. Imagine how you would feel if this were to happen to you. So 3 kitties are up for adoption.

I have pictures of 3 of the kitties – all are indoor kitties only. 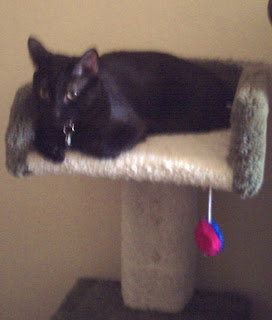 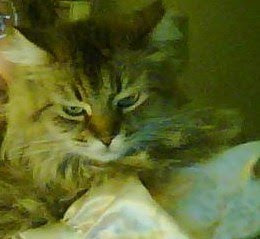 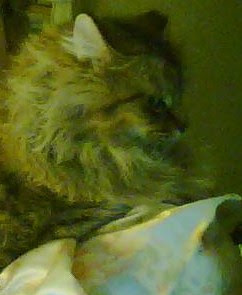 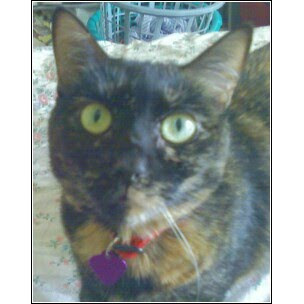 @ForeverGinger has started a fund raiser to help with cost of transporting these cats to new homes, ineeded. Please consider helping – every little bit helps and we are trying desperately to find homes for the kitties. Please read Ginger’s page for details.  http://foreverginger.chipin.com/perodacat-fund

@Hollieferguson has a link posted on her blog page also http://hollieferguson6.blogspot.com/

Pero’s mom has been agonizing over which kitty to keep. She has decided that whatever kitty doesn’t find a home, she will keep that one. Please help spread the word that these kitties need homes.  If you have some information or have a lead that might helpful, please email hollieferguson6@gmail.com and she will forward the information to Pero's mom.

If you are on Twittr, you can contact any of the following names as they also have Pero's email address.

Or you can tweet @PeroDaCat's mama directly if she follows you.  If she doesn't follow you, that won't work.  It might be a little harder to reach her as I don't see her on Twitter every day.

Do not try to contact me for 2 weeks.  We are leaving on vacation tomorrow morning 2-12-10 and won't return until 2-26-10.  Even though I'll be on vacation for 2 weeks, thoughts and prayers will be going out to @PeroDaCat's mama and the kitties.

My special thanks to @ForeverGinger and @Hollieferguson for their helpfullness in taking over since I can't be here and for all the work they have done behind the scenes to help out.

Special thanks also to @Rumblepurr for his posting the information on http://www.blog.catblogosphere.com/.

Also thanks to @Flicka47, @LouPeb, @ChesireK and @MaggieTKat for holding on to the email address and being contact people.

We have an amazing group of animals and humans who always seem to come through in helping others.  I just know we will again this time
Posted by Mariodacat at 10:41 AM 13 comments:

Email ThisBlogThis!Share to TwitterShare to FacebookShare to Pinterest
Labels: In Need of a Home

Something strange is going on in dis house! It’s a very messy house with clothes tossed about. There are plastic bags stuffed with more clothes. There are also two big boxy-looking things with wheels and handles. I think the oomans call dem suitcases. Then M tells me I’m going on a great adventure for 2 weeks. Now I ask you – what would you make of this!

Well, I overheard the peeps talking about taking a vacation, but then what to do with me. They talked about having my regular pet sitter come in, but then they said I’d get so lonely for 2 weeks cuz she can’t stay overnight. Then I heard dem ask my ooman sisfur if I could come there. (Dis is NOT good news)  They did tell my sisfur dat if it didn’t work out at her house, they could bring me home, call my pet sitter, and she’d come and take care of me the remainder of the time. (Now, I ask you -  why can’t I just go with my oomans?)

My sisfur has two cats. There is Big Guy Amos, a nice gentle, 13-year-old Tortie. Big Guy doesn’t mind being around me as long as I leave his food dish alone. (He’s not overweight by accident.)  Dis is Big Guy and me in front of the patio door looking for birdies. 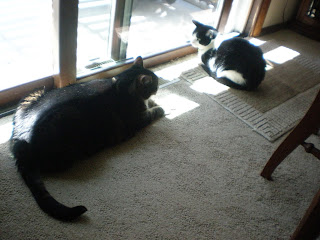 Then there is Missy Hissy Keiko, a 13-year-old Tuxedo cat dat looks like me. Missy Hissy HATES me!! (Just because I stalked her a few times when she’s been at my house, is no reason to HATE me!)  Dis is Missy Hissy’s picture.   (Don't let dat innocent face fool you!) 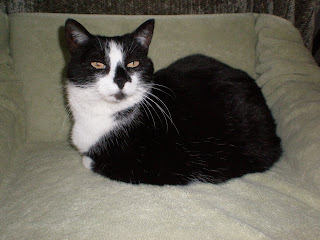 I’m very grumpy. First my peeps put me through months of vet and dentist visits. Now they are going on something called vacation and dumping me at my sisfur’s house.

Now, I ask you, does this sound like a great adventure to you? I confided in my girl friend @hollieferguson, and she has a plan to rescue me. Leave it to Hollie to come thru for me when my peeps desert me.

Please come back in three weeks to see how dis big adventure turns out (if Missy Hissy doesn't kill me first).
Posted by Mariodacat at 3:42 PM 17 comments:

Where Did My Toothies Go - Part 3

Well, friends, if it seems like dis story has gone on and on, you are so right. It’s still going on a little bit anyway. The Dentist decided on 9-22-09 dat the 4 canines needed to be removed. My immune system doesn’t like toothies or the bacteria associated with them. So, I went to sleep again.

I has to tell you, when all your toothies are gone, your mouth feels really funny for awhile anyway. The first two days after they were pulled, I kept rolling around on the floor because it felt so funny. M said I was on pain killers for 5 days, so I wasn’t hurting. I just didn’t like the feeling of no toothies. I didn’t feel like eating much either. M was about going crazy trying to find things I’d eat. M says my Twitter friends were so very helpful with suggestions on what to try and do and so was the Dentist. My food was mashed or thinned down with cat milk for a couple of weeks. Most of my food was yummy, some not so yummy. M gave the food I didn’t like to a friend who feeds a feral kitty, and dat kitty was thankful to get it. He he – I suppose if you is very hungry, you will eat anything. After lots of days, M surprised me and put my dry kibble in the bowl. Boy, dat really tasted good and I ate it all up. He he –My peeps even broke their own rule and started sharing their fish, chicken and tuna with me. About the only thing I can’t eat now is ooman beef cuz it’s too tough for me to chew with no toothes! 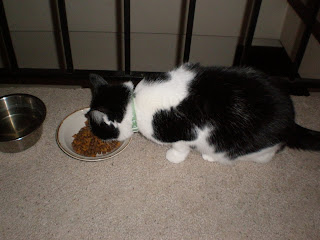 Dat’s a pic of me eating my dry kibble just to prove to all my friends dat you can still eat kibble or crunchy things after you has no toothies.

When I saw the dentist again for my checkup, the redness was still der. He called a pet formulary pharmacy and had a special medication made up just for me. He had been doing research, and another vet in California (wherever dat is) had a lot of success with dat medication for kitties like me. I was on dat stuff for about 4 weeks. He he – it was chicken flavor, it really was pretty tasty. I still took it under protest tho, just cuz I don’t want peeps to think I like meds. (Please don’t tell M or the Dentist tho. It’s a matter of principal. We cats are not supposed to like medicine.)

I was just back to see the dentist about a month ago because M & D were concerned dat there was still redness way in back of my mouth. The Dentist told M and D not to worry because there was no infection.   Since I was eating well, not in pain, playful, and back to being a normal kitty, he’d leave it alone. He said he could do surgery to remove all the bad tissue, but didn’t want to go dat route yet. He told my peeps dat his theory is “If it ain’t broke – don’t fix it!” (he he – I like his attitude. Don’t want no more surgery – ever!) He did take pictures of my mouth with a camera dat day so he had something to compare with if I came back again. M says it was so funny, cuz der were about 5 peeps hovering over me all trying to see in my little mouth. I didn’t think it was funny tho cuz I still don’t like anyone prying my mouth open. How would the peeps like it if 5 of us cats pried open der mouth and peered inside!

So friends, finally the end of my toothie story. M and D say I have been such a good boy throughout the 14 months this was happening. I has to admit, I was a good boy and only gave everyone a little hard time now and den – I am a cat you know, and that’s what cats are supposed to do.

I don’t know much bout money cuz I don’t have any. But M tells me dat what dey spent on my toothie problem, she and  D could take two 2-week cruises. But, she always adds dat I was worth it cuz I’m such a sweet, loveable boy who brings dem lot of joy! She also tells me dat if dey run out of money, I’ll have to get a job and support dem! He he - I was telling @JessicaKorman dat one day, and she suggested I become a professional lap sitter. If you hear of any job openings, let me know. I would do a very good job and am dependable.

I want to thank all my Twitter friends for their thoughts, prayers and concerns during my toothie ordeal. You were always der for me and M and were so very helpful with suggestions. We loves you all.

I also want to thank all my faithful blog readers for listening to me go on and on about my toothies. Hopefully, I won’t be blogging about dem ever again cuz I don’t have any! He he

I’d also like to thank Dr. Kressen for taking such good care of me for 6 months. If any of my animal friends are having serious toothie problems, I would highly recommend you visit Dr. Kressen’s website at: http://mypetsdentist.com/ and become informed as to what your options might be. If you live in WI or close to our boarder and your vet wants to refer you to a specialist, I would highly recommend Dr. Kressen. His office has seen clients from all of our neighboring states. They truly love each animal they care for der. We are very fortunate to have him so close – only an hour away.

Oh – and they have the neatest resident cat living der, named Sebastian. He just showed up on the doorstep of the clinic one day a few years ago. He is now their official ambassador/greeter. When the oomans sit down in the waiting room, Sebastian will jump up on the nearest lap and start purring. When you check Dr. Kressen’s website out – scroll thru the first page. Halfway down is a picture of a long-haired, light-orange kitty dat’s being held my one of the techs. Dat’s my friend Sebastian.

Please come back next week tho cuz M says I have an adventure coming up. Geeesh – I hope it isn’t anything like the toothie ordeal.