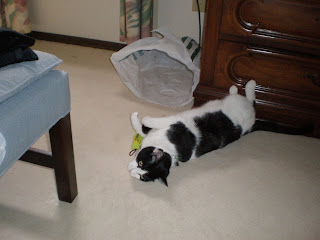 My story actually begins 2 months before I was adopted. (I can’t remember before dat time anyway.) I was found wandering the streets of my city by some kind human who picked me up and turned me into the local animal shelter. I was skinny, had worms (eekkk) and had an upper respiratory infection. Living conditions were less than ideal at the shelter, but at least I was getting something to eat dat was better den the garbage I was getting on the streets, and a vet visited and gave me ugly shots and awful tasting medicine.

Meanwhile the oomans, who are now M & D, were going thru a horrible time too. Their kitty, Misty, had been battling kidney failure for about a year and a half. She was being hydrated (I guess dat means given fluids – some dumb medical term dat is way over my head – but basically it means they were sticking her with a needle and pouring liquids thru her skin. EEEK) and she was on a special diet for renal failure kitties. Anyway, M & D had tried to do everything for her, but she was getting worse. The vet said she wouldn’t live much longer, maybe only a couple of weeks or so.

M & D’s major problem was dat they were scheduled to go on a Mediterranean cruise with their daughter & son-in-law on September 25, 2008. The cruise had been a surprise gift for them, bought and paid for by their daughter & SIL 1 ½ years ago. The trip could not be canceled. Meanwhile the vet was saying Misty probably only had a couple of weeks left. About 1 week before they were to leave, Misty had pretty much stopped eating. So, M & D made the agonizing decision to have her put to sleep before they left on the vacation. M tells me she and D both cried their eyes out cuz they loved her so. But they wanted to be with her to hold her when she went over the Rainbow Bridge rather than have someone else do it. So, Misty went over the Rainbow Bridge 5 days before M & D left on vacation.

M says I’d better stop here cuz dis is enough for one update. Stay tuned next week and I’ll pick up where I left off.
Posted by Mariodacat at 10:11 PM

Email ThisBlogThis!Share to TwitterShare to FacebookShare to Pinterest
Labels: Two Months Before Adoption

it's so hard to say gud bai to a beloved furbaby, but ur M&D did da rite fing!

What a gr8 blog. We're still figuring it out too. We just figured out how to put more than one photo in a blog so we're playing w/that.

Oh my, that must have been tremendously hard for your humans. We can't wait to hear how you got them though. Does anyone know why you're toothless?

What a nice bloggie, handsome. I still can't figure it out, I am not smart wif puters... I can't wait to read more.....

So difficult to say goodbye to a fur baby...even if it is the right thing to do. Love, kisses and nosebumps to you and you M&D.

Note to Cat With a Garden - half of the animals on Twitter know what happened to my toothies. I'll be telling the whole story within the next couple of updates. Then I'll be able to refer animals to the blog page for explanation.

Your M&D did a great thing. It's so hard, but it's such a sign of true love. They were lucky to be able to have all that time with Misty!

I know the second half of this story is going to be a lot happier... ;)

I am just so happy you has such a nice forever home with Mom and dad. being on the streets like you, I no it is not nice out there and I thankful eveyday. I loves the way you write. *Soft paw

Hi Mario, thank you for stopping by on our bloggie! We are not on Twitter, so we'll wait for the continue of your life story. We're not true outdoor cats either. Our mom snoopervises every step we do when we're outside. We have an enclosed patio/garden at our paw, but there are many doors that could open up to the city's streets...
Purrs, Siena & Chilli

DUDE!!! How did I miss that you had a blog?? OMC! This is awesome!! I can come here and be all manly with you, and mum can coo over your manly photos! (she wanted to put 'bootiful' but I wouldn't let her! heh heh heh)

Your mum and daddy are very good humans to care so much for Misty. It must have been very hard to let her go.

What an awful decision they had to make. It was the right decision but that does not make it easier to bear.
Sweet Misty had her M&D with her to help her.