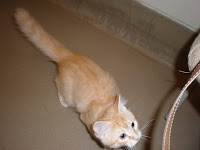 What's dat? Can I play with it?
Hi friends,
Just a short post to give you more pictures of Graham and an update.   Sorry it took us so long, but M did make an attempt to see Graham on Saturday.  Dat was not a good day as lots of peeps came in looking to adopt anipals, and Graham had been handled quite a bit dat day.  By the time M got to hold her, her feral side was showing a little.   So, M went back today hoping it would be a better day for Graham. 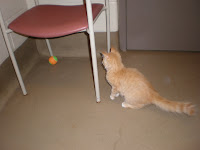 ﻿
M says Graham has grown quite a bit since 3 weeks ago compared to the pictures she took for the last post August 26th.  Graham had just woke up from a nap today and was full of energy and was very fiesty. 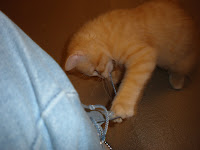 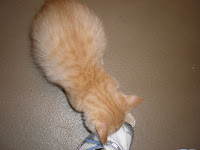 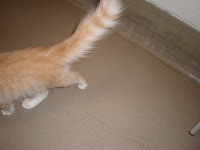 Take a look at dat tail.   Dat is one gorgeous floofy tail dat I wish I had.   he he - Only I'd want a tail in black or white to match my body.   I'd look pretty silly with an orange tail! 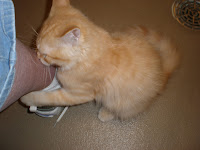 Den Graham tried to put the bitey on M's leg, but she really didn't succeed cuz M's leg would be a real mouth full for a little kitten.
Den all of a sudden Graham leaped up and grabbed M's arm with her claws and left 3 sink holes in M's arm.   (Don't worry, M is just fine and arm is fine.   It did ooze red stuff tho.   Now she has a bandaid on it.) 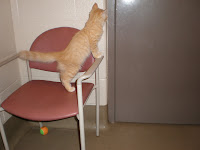 Graham moves with lighting speed, M says.   Before she knew what was happening, Graham was on the chair by the door as if to say - "Let me out of here."  "I want to run and chase something." 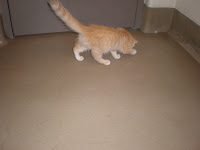 Now she's trying to play with a spot on the floor.   he he - silly kitty, there is nothing there.   What a cutie she is.

Now M has not had a kitten in a hundred years, she says, so she doesn't know if Graham is behaving like a normal kitten with energy, or if some of the ferral still comes out.  M said Graham definately was more active den the other kittens she saw in cages - the cutest one there tho.

The shelter told M dat they will not place Graham in a home where there are young children cuz they would just rile Graham up and dat's when she starts getting wild.   They also said they would probably not place her in a home with other anipals either for the same reason.  Now we just have to keep our paws crossed dat the purrfect human comes along to adopt Graham.

@Cheriswan has now closed out the fund and will be sending M the check so M can make a personal visit next week to deliver the check in person.  Stay tuned for more pictures at that time.

If you would still like to donate a few $$ to the shelter to help all of the anipals, you can send a check to:

Like most shelters, they have to rely on the generosity of humans to provide for some of the basic necessities.

M said while she was there for an hour, 2 puppies and 1 kitty (who appeared to be about 2 years old) were being adopted.   YAY!  Before any anipal is adopted, they are micro-chipped so if they should run away, they have a better chance of being found.  he he - I has a microchip in me too - somewhere, but I'm not sure where cuz I don't feel anything.

@Cheriswan has sent a personal email to each of the donors who contributed to the fund raiser.   Cheri and I deeply appreciate the donations, and I know the shelter will too.  You, dear friends, never cease to amaze us with your caring and generosity in trying to help the anipals in need.   YOU ALL ROCK!

We love you all

Email ThisBlogThis!Share to TwitterShare to FacebookShare to Pinterest
Labels: Graham 2

Graham sounds a lot like me. Whoever adopts her will have to put a lot of work and love into her but my Pop says it's well worth it. At least he says I'm well worth it. We're not sure I ever really had human contact before the peeps adopted me, altho they think someone had adopted and then returned me b/c I was a bit feral. I hope she finds that special furever home like I did.

I was a crazy kitten, too. I tried to nom on Mom when I was teething. I used to chew on her fingers. I ran around like crazy - in fact I still do. I get the zoomies all the time. It's sad they won't adopt Graham out to a home that already has a cat. I wish we could adopt her, but she's too far away and Mom already has me. And I'm not going anywhere!

I'm not a professional but I sometimes wonder if a home with another kitten would be good for Graham; she'd have someone to play with to use up some of that energy! The whole thing makes me sad and I hope Graham gets an understanding home soon.

I agree with blindmaximus. We could be wrong. I hope she finds the loveing furever home soon.

In many ways I am thinking that Graham behaves like a normal kitten.

My Cody sometimes gets over excited in play and has bitten (not to be mean, he is just over excited or I touch him where he doesn't want to be touched)

I think Graham is just an active kitty.
I do have a question, why is a female kitty named Graham???? Just wonderin'!!!

How lovely to follow the journey of this darling kitty Graham! Our love & best wishes for her to land in the purrfect home. (Sorry we been so distracted with our own missing cat lately ...)
Thank you Mario for sharing this story with us.
BUZZY

What a nice blog post. Good to know Graham is doing well. I'm hoping for a forever home for him soon. *pawhugs*

Graham sure is a cutie and we hope she finds that purrfect furever home!!

caren - I remember a tweet from Gaham's original owner dat said she thought Graham was a boy kitty, until she found out Graham was a she. But, she left his name Graham, and the shelter leaves the same name with an animal when it is brought in, if it had a name. It's very confusing to M too cuz every time she goes to the shelter, she referres to graham as a "him", then has to correct herself.

It's such a lovely thing you've done for little Graham.

Thank you so much for all your kind words and positive thoughts for Inigo. I know he feels you all purring for him and thinking of him.