Animal Photo Hunt #8 "I'm With the Band" and Prizes 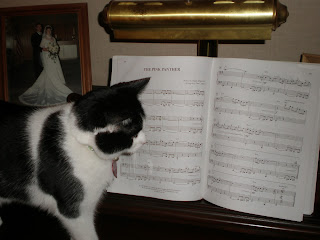 You didn't know I has a musical side to me, did you? Well, M and I both have a musical side. Sometimes we pretend we're with the ShiberlingBand and really rock the house!! I have a very important job too, cuz I have to make sure M hits the right notes!  Some times I even do solos.

My pal CokieTheCat sponsors this Anipal Photo Hunt and he gives out the neatest prizes if you are lucky enough to do the first post and follow all the rules. Take a look at what I got a couple of weeks ago. 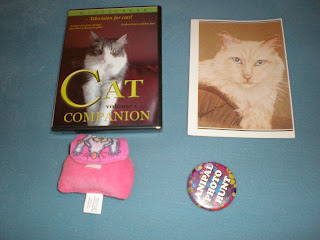 The first one is this GREAT CAT DVD called Cat Companion full of birdies tweeting, fishes swimmng and mices running all over the screen. I've had tons of fun with it. Then Cokie also sented a bootiful card with his picture on it and a message in his own handwriting (boy, he has good penmanship too). Then there is the catnip purse and a cool button dat M can wear.

Here is  me watching the mousies run around on the wheel thingy. I was trying to get dem but dey moves pretty fast. 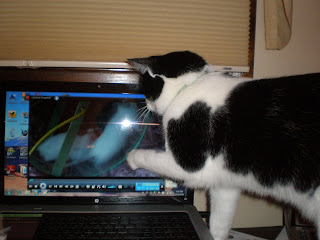 Here I'm trying to catch some little birdies called hummingbirds, but they were just moving to fast also.  I'm going to keep working on getting faster tho. 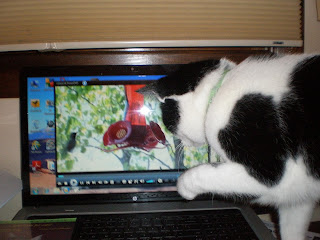 The video has tons of stuff on it for me to watch, and I just love it.  Thank you so much Cokie.  It's the greatest prize ever, and I'm so lucky to have won it.﻿
﻿
﻿Now you can join the Photo Hunt.  It's easy and fun.   Just go to Cokie's Photo Hunt blog site and get the details, then join the fun.   http://anipalphotohunt.blogspot.com/2010/10/anipal-photo-hunt-8-im-with-band.html
Posted by Mariodacat at 1:07 PM

I am very impressed cos its looks as though you could turn your paw to classical as well as rock 'n roll that's quite an achievement!!

Congratulations on winning the prize awsome prizes from Cokie!

I did not know you be so talented making singing musics. That do be furry kewl. And grate pwized you wonned from Cokie!

We could use a good keyboarder in our band! I love the separate page you made for the blogs you follow. Mom will have to play around with those tab thingees.

MOL MOL! You look so cute trying to catch the mousie and birdies. I still haven't gotten to watch mine.

you got the most wonderful prizes I am soooo happy for you!!!
Those videos look like sooo much fun!
I bet you will catch the mousies and birdies! xoxo

Oooooh. You play the piano too? We could get together and do a duet! That would be so much fun!

Mario! Play us a tune, buddy!! And congrats on winning that great prize! That DVD is almost as good as the real stuff!!

That video looks like a really good one. Wow, you can play the piano. That is so good. Take care and have a great day.

Congratulations, Mario, those are great prizes! Also, if you ever record a music CD, let me know, I want to be the first to buy it.

Wow! Congrats, Mario, you got great prizes! That Cat Companion DVD looks so cool!
We love that you're into music. Both our Mummy and Daddy are musicians!
Purrrs, Keiko, Kenji, Pricilla & Yuji

Congrats on your prize my handsome friend!!! Those look like some mighty brilliant prizes, too bad you didn't win REAL hummingbirds!! *om nom*

Love the pic of you reading music, not even my humans can do that. MOL I will have to look for that DVD. My bro ion will love the mice.