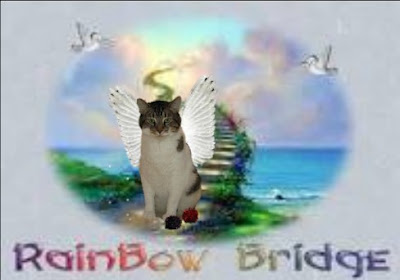 I come to you today with a very heavy heart as our Twitter community lost another top notch pal last night.   @SeabassCat (Sebastian - or Seb, as his family called him) had to cross the bridge.

Seb became very ill a few days ago and was rushed to the anipal ER because he didn't feel well and was having trouble breathing.   He was in an oxygen tent for a couple of days, but was not eating.

Even with several doctors consulting, they could not come up with the cause of his feeling so badly and failing so rapidly.

This has been very hard on his humans as they had to make some tough decisions.  Rather than have their poor baby suffer, they decided to help him cross the bridge so he could be at peace.   They only wanted to do the right thing for their sweet boy.

Our hearts are with the family as they have been through so much in the past few months -  having lost all their possessions in an apartment fire - saving only themselves, Seb and Dottie (their Guinea Pig).   All of Twitter was so happy that the family made it out of the fire, and now this happens.

M says sometimes things happen and we don't understand why - this is clearly one of those times.   Seb was  way to young to have to cross the bridge - that's supposed to happen to us when we are senior cats - not young ones.  But I wouldn't like it either if I knew he was suffering.   M said it was a tough decision for the family to make but they made the right decision and it was the kindest, most loving thing to do.

I'm really going to miss you pal, but I know you can run free now, have already been welcomed by @PepiSmartDog and all our pals that are at OTRB, so you are in good hands.   Fly high now with those new wings you earned.   Love you bunches.

Mario
Posted by Mariodacat at 8:46 AM

Oh no, I had not heard that sad new Mario. I was so hoping he would be okay. We all send love and purrs to such a wonderful family.

Oh that is so sad. We certainly send many purrs and hugs to the family. They are in our thoughts and prayers for sure.

Very hard to lose our pals especially so young! Also tuff when you never know day real cause of problems. Be happy Sebastian.

we is not on twitter, but please let Seb's family know how very sorry we are.....

I just heard this morning. Sebastian will be joining the OTRB contingent, and he and BJC will pawty likes it's 1999!

I'm heartbroken. Amy & Lee have been through so much and now to have Seb cross the bridge... it's too much to deal with in such a short time. I know Seb's ok OTRB and not sick anymore, but I'm so sad this happened.

We are so sorry about this news.

Very moving post and so sorry about such sad and untimely news. Holding all the family in our paws!

The Furries of Whisppy said...

This is really very sad news. We really thought he would rally round and get better. May he be run free at the Rainbow Bridge and we send comforting vibes to his pawrents.

Oh, Mario! I just read the news in your Twitter post. Seb's family has been through so much! I am very saddened by this news & heartbroken. I was hoping he would pull through this as he had gone home yesterday. My sympathies to his family. We have lost way too many friends this year. Seb, I know my Sebastian, Peaches, Patches, & Tabitha kitties have all come to you to welcome you to The Bridge! May you all run free & have fun as you wait for all of us to join you again!

Truly sorry for your loss.

It’s so very sad, Mario. makes all our hearts very heavy :( Dear Seb is at peace now, but we are very sorry for his people xox

I was so sorry to hear this - how awful for Amy and Lee after all they've been through. And we will all miss Sebastian lots.

Sending my love to Amy, Lee and DottieGP. Our hearts are breaking and our eyes are leaky.

Oh no I am so sorry to hear about Sebastian. He is at peace with no pain. I hope the pain in his family's heart will be relieved some day.

I'm gonna purr for him, Mario. And his family, too. It's the least I can do. purrs

This is just sad news. A blogger friend of mine mentioned that June was a dreaded month because her loves ones often cross the rainbow bridge during this time.

I'm going to pray for Seb's family, too.

We just heard the news about Sebastian. We are so sorry! We send comforting purrs and headbutts to his humans.

Am so sad for Amy, Lee & Dottie - to lose Sebastian so soon after the fire is unbearable... sending them #ComfortingPurrs and love. Thank you Mario for this beautiful tribute to a wonderful pal. God Speed Seb! We'll always love you! ((HUGS))

That is so sad....we are crying...so much loss for his family.

This makes us so sad. We'll try to get our award up fur Monday. Have a great Sunday, furriends. xoxo

Mario, thank you for warm send off for Sebastian. So sad so young. Paw pats sent to Amy, Lee and Ms Dottie

Mario
We too were so sad to hear about Sebastian. We had very sad ears when we learned that Seb went OTRB. We are purring and praying very hard for his family, but we know Seb will watch over them.

So sad about Sebastian. Wonder if the smoke caused his breathing issues. Sending lots of purrs to his family!

That is very sad news about your pal Mario. Is ard losin chums. We send you hugs.