Flying Away with Sammy - One Spoiled Cat and honoring Easy

This post is to honor Easy of https://easyweimaraner.wordpress.com/, suddenly crossed over to the Rainbow Bridge recently.  Easy wanted to do a Fly Away with Sammy of https://onespoiledcat.wordpress.com/.  They wanted to fly around the world to visit all of our blogging friends.   We would LOVE to have them visit us in Green Bay, WI.   Here's why: 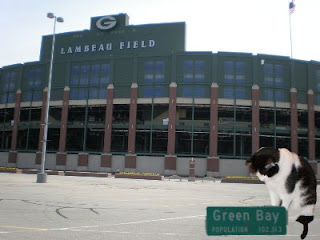 First off, the city of  Green Bay, Wisconsin is the home of the Green Bay Packers Football Team. While they aren't doing all that great score wise this year, they are known all over the world and have won  4 Super Bowls, in 1966, 1967, 1996, and 2010.   We are proud of them as they are the only big-league professional football team that is owned by shareholders many of whom live in Green Bay.

For you history buffs, Green Bay is the oldest city in Wisconsin.   Jean Nicolet founded a small fur trading post in 1634 on the Fox River.  From there it grew into the City Of Green Bay.   The city restored many of the original buildings of that first settlement on the Fox River shore and turned it into a Living History Museum, which then became a  State Park - Heritage Hill State Park.  This is a picture of the first court house: 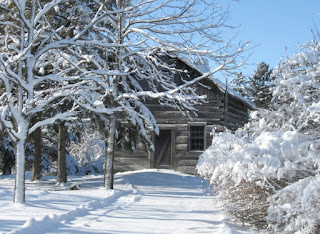 So Sammy, we hope you will choose to visit Green Bay, Wisconsin.  But, you'd better hurry cuz winter is just around the corner (M says).    (Looks up to sky to see if Sammy is coming yet.)   I think I see him way off in the distance.

P..S. M here:  Sending big HUGS to Sammy's humans.   We know how tough it is, and we will miss that little precious boy also. 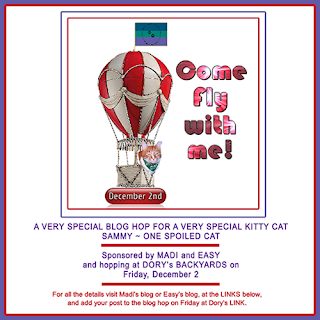 Posted by Mariodacat at 7:27 AM

Sammy will enjoy places you picked
Soft purrs for him
and Mario, Have a lovely weekend
=^x^=

Mario, I am so glad you sent him to Green Bay! He will love every moment of the tour! xoxo

Mario! Green Bay, Wisc. to where the Packers play?? WOW! I love watching football on TV - I sure hope we have TV at the Bridge - I should think we'd get great reception...........I am having a wonderful time on my tour - Easy and Madi sure did a great job making it a BIG event. I am glad that I could come meet you in purrrrson and see your town. Thanks for joining in the fun!

We're sure going to miss him.

my eyes are leaking. This was soooo incredibly sweet and special (((hugs)))) We will miss him too (and of course, Easy) xoxo catchatwithcarenandcody

I am sure Sammy loved your choices. The blogosphere will not be the same without this sweet boy.XO

That was a very nice tour Mario, even the snow MOL! We sure will miss Sammy.

Those look like great places to visit! Even with the snow!
hairballsandhissyfits.com

What a wonderful place ! Purrs

Mario I think we want to come visit too. Sammy is going to love visiting!
Timmy

I just went to read about your toothies. Our brofur Buttons has FIV and now has lost almost all and he get along just fine. Seems you do too Mario
Purrs my friend
Timmy

thanks for sharing the tour. We enjoyed it and know Sammy will too.

We will miss the handsome cat. Our thoughts are with the families of both Sammy and Easy.

We know Sammy loved visiting Wisconsin. We'll sure miss him too.

Green Bay seems like a really cool place (literally). Good luck to the University of Wisconsin Badgers in the B1G Championship, too. I know Sammy and Easy will have a good time visiting you.

I sure will miss Sammy and Easy

Andy and Sisfurs Tater and Shelly

I'm so glad that so many of us gave Sammy such a wonderful send-off. <3

Mario, I almost wish I could have come along too. Pop would have been so jealous. He's seen every GB championship.

I remember hearing about the Packers and how their loyal fans mae their team proud. Sammy will love this place Mario!!!

We just know that Sammy would enjoy a fly in to your Green Bay, Mario. Petcretary heard of the Packers, even before she came to the USA!

Sending big purrs and some woofie licks to you and of cousre lots of them to Sammy and Easy's furmilies too.

Mario, that was a wonderful tour, for sure. We know Sammy surely loved it.

Such a nice tribute to your friends :)
Purrs Georgia,Julie and JJ

Thank you for your kind thoughts for Treasure.
We miss him.

Mario, it was nice of you to give Sammy a tour of Green Bay. I've never been to a football game, but if ever I went to one, I'd want it to be in Lambeau field.