Lots of news to share today, so I’ll get right to it! 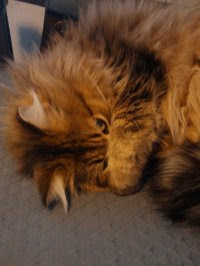 Here’s an up-dated photo of MamaKitty  What a cutie all curled up.

The message as received from @Perodacat's new family:

“A while ago you asked for some updates on the cats. They are still doing great. We actually had Pero's hair cut really short at Petsmart because he had some mats on his stomach that I was unable to brush out without bothering him. My fiancée just put a picture he took of Mama on twitter today, and I will also upload some photos of Pero's new haircut in the next couple of days. Anyway, as for updates, Mama is just a snuggler. She is very cute in the morning; she doesn't sleep in bed with us at night, but in the morning she likes to jump onto the bed and be petted while she "kneads" with her paws. And the other day, we couldn't find her for a while. It turned out she had crawled into a cupboard and was hiding contentedly behind some camping gear.

As for Pero, all our friends love him because he is so "talkative.” He seems to forget that he can jump up high sometimes, so he will very cutely look at the countertop or the fridge or something, and then look back at somebody else as if saying, "I want to go up there! Pick me up.” We are enjoying them very much, and hope you are well. “

We are all so happy that Pero and Mamakitty are doing so well and have a wonderful new family that really loves them. Knowing they have a good home must bring some comfort to @Catsalady, as I know it was very difficult for her to have to give them up.

Now for an update on another friend of mine - @WILDABOUTBIRD'S RESCUED KITTY:

Honeybell’s (as he's fondly known by some of us on Twitter) mama  rescued a stray kitty that had been very badly injured and in desperate need of medical attention. Rather than leave the poor kitty lie there, Honeybell’s mama picked him up and rushed to the vet. KittyKitty has had several procedures done so far with a resulting bill of $2,000 to date – with much more to come. My good friend @Petiethecat has a Chip-In Fund Page set up to help with those rising vet bills. Please considering donating – no amount too small because it all adds up.

Bless this wonderful lady for coming to KittyKitty’s aid. Most people probably would have turned their back on the situation and walked the other way. See @Petiethecat’s blog for details at http://bit.ly/a2yfTd

This is Mario saying bye for now.
Posted by Mariodacat at 2:17 PM

We love you Mario and your mama and papa too! Thank you for mentioning my sister... an update is on Petie's bloggie; she is progressing well and some stitches have been removed! She is showing a very sweet and dear personality and is forever grateful to all!

I already know how sweet and kind Hunk is, now I know it's his WHOLE family!!

Sounds like a happy ending for Perodacat & Mama Kitty!