The Rise And Fall Of @Ladycat3 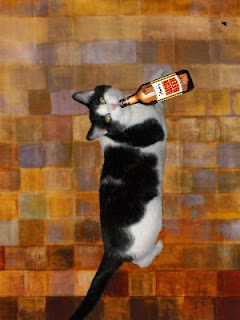 Here it is friends - the Rise and Fall of Ladycat3.  It's still embarrassing to tell.

(Oh, the picture is Mariodacat all ready for the @pawpawty this weekend and trying out the famous Hanks Bacon Beer.)

In February 2010 I celebrated one year of being on Twitter.  Dat brought back lots of memories of how and why we started.  It all began because of M's curiosity of what is Twitter.  She had been to breakfast with friends and the subject came up.  No one in the group had any idea of what Twitter was - they jsut knew dat Oprah and Ellen did it.  So, when M came home, she said to me "Mario - let's have some fun today and investigate Twitter."  Well, I'm always up for a new adventure, so I hopped up on her lap, and she fired up the computer.
Now keep in mind dat M used to work for a large school system that had a Techno Department (whatever dat is) to create/install programs, etc.  All she had to do was learn how to operate the programs.  If there were poblems, all she did was pick up the phone and call for HELP!  Otherwise, she's pretty dumb about puters.  Since I'm a cat, duh - I'm no help either.  Of course the first thing Twitter wanted was something called "username."  All M could think of was "cats."  Well, how bout Ladycat3 den.    -   WALLA - the birth of @Ladycat3.  (Now I remember very well trying to tell her to use Mancat3 or Mariodcat, but of course she didn't listen to me - stubborn oomans.)

Once we had the acount created, den what.  We cleary did not know what we was was doing.  There was a "search" thingy, so we searched for our big interest of CATS (he he - you were expecting something else maybe!)  Den the flood gates opened up and there were lots of anipals listed.  We cicked on a few and noticed a "Follow Button."  Well, might as well see what happens when you follow. "Look Mario" said mom.   "There are animals talking to each other."  "Maybe you would like to say hello to them," she said.  Well friends, before long I had lots of followers and people to follow, and I was talking up a storm!  My very first follower was @Wildboutbirds, then @EmmytheCat, then @Totally Lamont, then @Baby_isis, den @Petiethecat.  It just kept growing from there and here we are today - so many wonderful friends.

We didn't talk at all at the first #pawpawty cuz we were too shy and everyone was having such a good time.  But it sure was fun evesdropping!!  But eventually I got brave enough to talk on the time line.  Everyone was so very friendly and welcoming.  I remember dat @EmmydaCat even introduced me.  Den I really got lots of followers.

Now I didn't much like talking like I was a girly (tho I did have fun flirting with the guys.)  But M kept telling me dat it would be too embarrassing to say I was a boy kitty with a name of @Ladycat3 and admit how dumb SHE was.  We were too stupid at the time to know you could  simply change your name.  So, I just kept going on like I was a girl. - My costumes back den were pretty simple consisting of pink with flowers  (I mean these are almost embarrassing to even show dey are so bad but we'll show dem to you anyway).  We didn't have a program den to make pictures like we do now.   So we tried some of the free sites.  There is nothing wrong with the free sites, it's dat the operator (the big M) didn't know what she was doing AGAIN!  But we limped along and tried as best we could.   Here are 2 of the first ones. 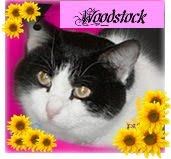 I member in May we had a Cinco Demayo pawpawty and my good friend @Mama_Gerbil came to my rescue and photo shopped dis picture for me to use. I was still known as @Ladycat3.  Now dis one was professional. (Note the frilly girly stuff I'm wearing tho cuz I'm stil Ladycat3.)  Didn't she do a great job?  I felt so proud to have dat AV & MamaG was so kind to do it for me. 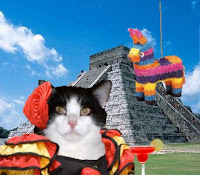 M and I were feeling very guilty bout lying about me really being a boy all dis time.  But we were in so deep, we didn't know how to own up to how stupid we were in the beginning.   Den, In October 2009, @JazzydaCat DM'd me and said she'd like to interview me for the Ducky Club blog.  I was so surprised dat I was speechless for awhile.  (Imagine me being speechless!)  M looked at me den and said "you know Mario, this might be a chance to tell everyone you is really a boy!"  Dat sounded pretty good to me cuz I was getting tired of pretending to be a girl and always wearing pink..  I just wanted to be myself.

I dictated and M typed up a draft to @Jazzydacat and emailed it of to her.  Well, you should have heard @Jazzydacat go into hyserical laughter.  (We could hear her way over here from the UK and not useTwitter either)   Jazzy thought it was the funniest story she had ever heard and didn't waste any time publishig the article or broadcasting it on Twitter.  (Now we all know how Jazzy got to be a reporter for the @AnipalTimes - she loves a good story).  She then said she was happy I was a boy so she could flirt with me! he he (I must admit the thought of flirting with all the purdy girls I had met kind of appealed to me too, and dat Jazzy certainly is purdy.)  If you are interersted in reading dat interview, here's the link to the article published on October 12, 2009.

M and I were so afraid of losing friends over coming "clean' so to speak.  But you know what - we didn't lose one friend.  Most my friends thought it was extremely funny, and I got teased a lot.  Some friends were very shocked, but when dey got used to the idea, they were fine with my being a boy.  It was vary hard "owning up" to what we did tho to @Petiethecat cuz I used to flirt with him too - lots.

Now I limped along using @Ladycat3  for a couple of months after my story was made public simply because we didn't know you can just change your name anytime you want.  (We are so dumb with all this techie stuff!)  In fact, it was only in December 2009 when we finally created a new account for @Mariodacat and slowly started adding my followers to dat account.  It was after we created that new account dat we learned you can just change your name.  he he - It seems we always do everything the hard way.  But we've learned a lot, thanks to all the help we've received over the past year from all of you.  We're still learning as we go - sometimes the hard way tho.

Now @Ladycat3's account we mostly use when I land in Twitter jail from too much talking, which happens a lot.

That dear friends is the story of Ladycat3.

Come back next week cuz I think we're working on a special story dat I can't talk about yet.  Besides, if I tell you now, you won't come back!

This is Mario signing off.  Love you

(Note to M from Mario - would you pleazzzzze get rid of those Ladycat3 pictures now!)
Posted by Mariodacat at 11:08 AM

I noes this story but you iz rite, efurry time i hears it I do laff n laff. It wuz a good joke on efurryone evan your mama wuzn't it? *smooch*

hahaa! We love you~whether you are Mario or LadyCat! You are such fun and a very good friend too! Purrs and/ Hubba Hubba it depends to whom I am speaking; MOL!

That is the bestest story and I lub hearing it all over again. (I furst founded out about it from Jazzy.) It be the skandal of Twitter, the Mario sex change, BOL!

Of course I'd come back if you gave me a hint about your next adventure. I'm a Marioholic. Thanks for making me laugh again with the story of your purrsonality crisis. This month is my 1st Twitter anniversary so I might have to let you guys know how I came to have a Twitter acct.

All I can say is that rudy was really glad he was a gentleman when he walked you home. Can you imagine his surprise if ladycat3 had different parts than he expected?

Anonymous said...
This comment has been removed by the author.
Tuesday, June 01, 2010

I have been anxiously awaiting this post! I remember when I thought Ladycat3 had quit Twitter and I was so sad. I was thrilled when I read your confession on the Ducky Club blog! I love you to bits- as Mario or as Ladycat3!!

What a great story! I knew that something had happened regarding @Ladycat3 and your account, but I didn't know the whole thing. How funny, Mario! It's great to learn as you go!

Hehe. I was waiting for this post, too! What a great story, Mario.

Mario... what a great story. And, concatulations to you for how far you've come. I identify with your description of your first pawpawty. I was very shy at my first pawty too.... I just couldn't keep up.

Anyway, it's good to hear your whole story. Great job.

George The Duck and the HotMBC Kittehs said...

This story makes me laugh every time. I am glad that you are just you now. That has to be a lot simpler. *ducky hugs*

I love that story...it was well worth waiting for.
Can't wait to see what you write about next :)