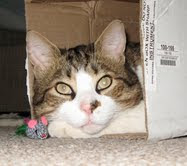 CheriSwan
Hi Anipals!
I wanted to tell you about my experience with our anipal community and how I believe we (yes, all of you!!) saved the life of one orange ball of fluff called Graham.

I am @cheriswan on Twitter and am usually a very quiet anipal. My mom tries to help out with the anipal community by either volunteering with the Anipal Times, donating time or money to our various charitable works.

Last Sunday my mom noticed a thread about a little kitty on twitter, @CallMeGraham and how the former owner tried to save this feral kitty but it had become too much for her and she was surrendering her to the Bay Area Human Society in Green Bay, WI. The thread was tearing at my moms heart because I myself am I rescued feral kitty, 13 years ago, from a local dump just before they were going to poison the cat colony. 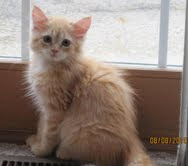 Several people were trying to reach the Humane Society but it was closed on a Sunday. Our anipals were concerned that little Graham might be put to sleep because the former mom described Graham as wild and out of control. Mom was emailing several contacts on their website and was shocked to receive a reply from the Director of Animal Welfare a few hours later in which she said that Graham was alive and at the Shelter. The first small victory for us! We even had a loving home in California for Graham, providing we could get her from WI to CA.


At this point mom became the self-appointed point person and decided to make it her mission to bug the BAHS to find out Graham’s fate. Monday morning mom called and a polite lady at the front desk answered. She said that Graham seemed like a nice kitty and it would take a few days while they evaluate, fix, vaccine and determine her temperament for adoption, but they would not put Graham to sleep because they had plenty of room at the time.

Everyone breathed a sign of relief. We were even blessed with the offer by @MarioDaCat’s mom. She lives in the area and was willing to check on little Graham on Monday! 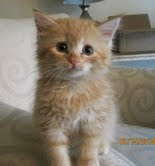 Monday afternoon, mom got some news that Graham was considered to be a very feral and wild kitty. Even the staff couldn’t touch her. It seemed that Graham was not a good candidate for adoption. Mom’s heart broke and her determination kicked in. The shelter had said that if someone wanted to come and get Graham, they would fix her and hold her for a few days.


Animal rescue by air transportation was no longer an option, considering Grahams nature. Mom was overwhelmed and grasping at straws. She thought of creating operation “Graham Freedom Train” where she would ask anipals to help drive Graham from WI to CA. Her next idea was to find a farm or feral colony to release Graham to in the WI area. Then, she decided she was going to drive the 2500+ miles to get Graham herself with the help of some other anipal moms. Like I said, mom was getting desperate!

The anipals and mom decided to go ahead and fix Graham and try to find a way to save her. Mom got back on the phone Tuesday morning.

Later on Tuesday morning mom was able to talk directly with the woman who accepted Graham from her former owner. She said that the lady had scratches all over her hands and arms while Graham was acting very wild. She said that the last two days Graham had calmed down considerably and the staff (even the main director) were taking her out of her cage and playing with her to socialize her. I was told that they will continue with her socialization at the shelter and then place her into a foster home to teach her kitten manners and when they believe she is ready they will place her up for adoption. 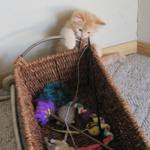 When mom asked her why @MarioDaCat’s mom could not see Graham when she stopped by on Monday, the lady said that they needed to think about the safety of the facility, staff and visitors and they were unsure of Graham’s disposition as the time.

The lady also said that a volunteer takes pictures of the animals once a week and to ask the Director of Animal Welfare if she could email to us so we could see that Graham was doing well. When she volunteered that information, it made mom feel a little bit better that Graham was still there and safe.

Mom is still a little skeptical so she will be calling the shelter at least once a week until we are sure that Graham is placed into a loving home. Watch my twitter stream for updates or feel free to ask me what the status of Graham is. 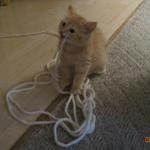 I think that all of our concern for Graham may have helped save this kitty. @MarioDaCat’s mom said that when she first walked into the shelter, the receptionist made the comment that Graham certainly had generated a flurry of activity. @MarioDaCat’s mom told her “well you don't know the power of the Twitter Universe.” See anipals, you rock!!!

Mario here - I personally want to thank Cheri & her mom for their tireless effort in keeping tabs on Graham and for guest writing this article..


M will again make an attempt to see Graham on Tuesday, August 24, 2010, but she doesn't hold out much hope for seeing her.   The receptioin staff was downright rude to M on her last attempt, and she was not even able to talk to the director.  M said she will feel much better when she actually has a visual siting of Graham, so she too will keep up with the visits.
Posted by Mariodacat at 6:43 PM

I can't believe that cute ball of fluff playing with the yarn is feral. I hope M can see her and that she finds a furever home. You and Cheri are angels for looking out for Graham's welfare.

I was pretty much going to say exactly what Cathy above said. That cat is adorable and I find it hard to believe that she is as "wild" and uncontrollable as they are saying.
Yes M and Cheri you are truly special people...I pray that Graham gets a furever home! I look forward to good "mews!"

The power of our anipal family is amazing. You should have seen the video Frugal Dougal's mom did for Bark World (I'm sure she will post it) - not a dry eye in the house!

What a cutie Graham is!! Purrs to Cheri for being so diligent in making sure Graham is okay. And we purr that a good home is found for her.

I so wish Graham's person had asked Twitter for help first. It's hard to trust a Humane Society and there might have been someone experienced with ferals who could have taken Graham and saved her being exposed to the Society, then a foster home, then whatever is after that.

But it is amazing the power of the anipals and what they've accomplished here. Very inspiring.

If there is anything we can do to help my friend... you only need ask. Graham looks lovely.

Being a rescued feral kitteh myself, this especially tugged in something in me. 12 years ago, I adopted my humans after raising myself for 2 years. I know that with all of Cheri effort and Mario M efforts there is no doubt that Graham will get to CA. XO

What a wonderful story. As you know, my peeps have rescued alot of kitties so this really hits home with them...and with me too since I am one of them! Little Graham deserves a chance and thanks to Cheri it sounds like she's going to get one. We will keep her in our thoughts and if there's anything we can do...u know u can always count on us.
xoxo

the power of love :)purrs

Oh Goodnes! What a lovely Kitty and how honored I am to be apart of a group of people & anipals who care so much for animals in need. **Nosetaps to Graham... hang in there little one** Buzz Lucas & mom

A giant thanks to all the twitter pals that have been helping Graham. Mom, Fuzz and I have been so concerned about that little kitty. You guys are Graham angels. Big BEar hug and rare BEar kisses.

I wish we had a way to get Graham from Wisconsin to Colorado. Graham is so cute and would probably make a good sisfur. I was feral and Mom calmed me down and now we just love each other to pieces. I bet she could do the same for Graham.