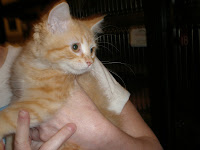 It's me, Mario, with a second update on Graham.   In addition to posting the pics dat M took on Tuesday while visiting the shelter, I has some other news too.  In between news items, we'll post latest pictures of Graham taken on Tuesday.   They not the best pictures, but M had trouble taking pics with one hand and playing with Graham with the other hand!  he he- she wished she had another set of hands.   She said she had forgotten how quickly kittens can move! 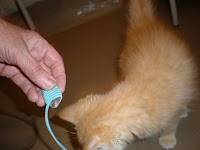 M called the shelter today cuz so many anipals had seen Graham's picture removed from the shelter's website.   Many thought she had been adopted already.   Well, she hasn't been adopted yet, but she has been quarantined for a bit as she has an upper respiratory infection.   Now, it's nothing serious, and they are treating her for it.   Unfortunately, it's a rather common thing in shelters with so many anipals in such close quarters.   Staff there assures M she will be fine.  he he - when peeps adopted me from dat shelter, I had upper respiratory infection too. 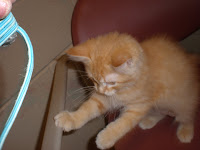 Like most shelters, they is operating on a "shoe string,."   Staff has been very kind in keeping @Cheriswan updated.   So, Cheri & I put our heads together and thought maybe we could raise a few dollars to donate to their shelter for the good of all anipals.   It would help the shelter out greatly and would be a "good will" gesture on our part as I'm sure they have never been so bombarded with interest on any of their other anipals nor been in the national spot light before.  M left a personal donation there when she visited, but wished it could have been more. 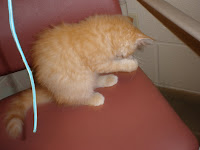 Now M went to the ChipIn web site and attempted to enroll and get a widget (whatever dat thing is).   But, it seems our new puter is a 64 bit and Chipin can only take 32 bit.  Well, actually, M says it's the Flash part of the program dat isn't requires the 32 bit.   Anyway, @Cheriswan came to the rescue and created the Chip In page for us.   Brand new puter and it sitll not doing what we want it to do!   Geeeesh! 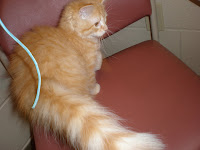 Cheri set this account up to go into her paypal account.   When the fund is closed out, she will send a check off to the shelter, and I know the shelter will be grateful for the funds, and I'm sure they will be very surprised to know that the twitter anipals were so appreciative.  So whatever you can spare will help - no amount too small either.
http://callmegraham.chipin.com/callmegraham


he he - isn't Graham's tail gorgeous.   Wish I had all dat floof (M probably happy I don't cuz I fur the place up quite a bit myhself), but I think it's a bootiful tail on a very bootiful kitten.  M held her for a few minutes, but mostly she wanted to play.   M was so happy she got to see her.   We'll call the shelter next week to check in and see how she is doing.

I is signing off for dis time.   Thanks for visiting.

NOTE - The day after this blog piece was written, M called the shelter to tell them dat we had set up a fund raiser for them.   Kelly was  "blown-away" with surprise.   Kelly, made the comment dat folks were still calling from all over the country about Graham.  She said she never realized Twitter was "that big."     She told M she would have the person in charge of Graham's care call mom on Monday.  So stay tuned.
Posted by Mariodacat at 11:12 PM

Is the shelter being better about little Graham? We'll donate if you say they are, but they sure didn't impress us from the last post!! Little Graham is just adorable and we're happy to help (and hopefully the shelter is being better)

Thanks for the update. Those pictures are wonderful Mario... Have a great weekend.

Thanks for all of your comments. To answer Rumblepurr's question, yes the shelter has been better about Graham. They really are a good shelter & the staff cares about each anipal they have there. M is thinking they might have been cold to her in the beginning because they might have been thinking she was form a radical group - so they were being extra careful. M mentioned to them on her first visit that she represented a group of folks on Twitter who were very interested in the welfare of this little kitten. M just showed up unannounced one morning and we think her surprise visit caught them off guard - especially when she kept stating that she wanted to see Graham. They were always very nice to Cheriswan when she called them. I think maybe they didn't trust M. Actually, M didn't trust dem in the beginning either, but she feels much better about the shelter now that she has seen Graham & interacted with staff more. M feels sometimes "kill shelters" get a bad rap. People that work there have a geniune love for anipals or they would not work there. They would prefer not putting anipals down, but what else can they do with limited staff, facilities, and volunteers if they feel an anipal is not adoptable. M has donated money on her last visit and will do so again.

She still doesn't look feral! Did M think she was feral when she held Graham and played w/her. After I was adopted, the peeps couldn't pick me up for over a year w/o getting bit or scratched up and still I was considered adoptable. I guess New Yawker's and New Jerseyians are just tougher so I wasn't considered feral. I'm still a work in progress but Pop says I'm well worth it.

I want to thank all those who are helping this kitten. I think I see in the pictures that the animal plays and I see that you can take in the arms, so I think that this cat is sociable and very cute. A true wild cat does not play or can touch it. I think this baby is naughty. And I'm sure we can educate and take with confidence, with patience and love.
I promise to share two true stories of two wild kittens take them off the street and became very affectionate (they were biting, scratching, snorted and are not able to hold hands because they caused significant injury)
Thank you Mario! ((HUGS)) XOXOXO

Hello Mario,
Graham is so adorable. and what a gorgeous tail he has. We dearly hope he gets adopted. He will certain make somebuddy very happy.
Great thing you are doing there trying to help Graham.
wags,
Gin n Bud

OMC, Mario! Graham is just as adorable as can be. I just went back and read @cheriswan's post about the sweet kitty -- it sounds like the anipals really made a difference here! I love it!

So wonderful for you and Cheriswan to be helping that cute Graham kitty out. I am counting my allowance out so I can help!

It is nice to see fotos of her. I hope she is adopted soon, we were so shocked when she was put in shelter. Thanks to M fur going der & letting us nose wat is going on.

**Hi five Mario for your work on educating shelters on the power of a community of Anipals. that Little puss Graham is sure a sweetie.

When the shelter adopts Graham out to a loving home then me and me mommy will make a nice donation to them. Until then, being a kitty in a shelter that euthanizes for space, we feel Graham is at risk the longer she waits there (esp with a URI).
Tho the shelter most certainly needs donations regardless of Graham being there, Graham is the very reason for everyone pulling together and we want to make sure she is adopted out to a loving home.