Let's join @Catsalady, Abby and Gwim in doing the  "Happy Dance".   She has approved of the new assisted living facility.  In fact she said it is a "very nice place and even has a balcony and storage."  They will be moving there on March 29th. I know you will want to wish them well in their new home too. When M told me the news, I started chasing my tail cuz I was so very happy for them.  @Catsalady even tweeted she was doing the "Happy Dance."  (Not easy to do in a wheelchair!)
Here's a picture of Abby and Gwim as it appeared in my bloggy awhile back. 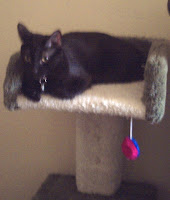 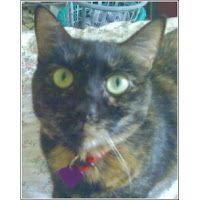 Abby on the left and
Gwim on the right.

Now we have even more good news.

When M was searching for a mobile vet to go to @Catsalady's house to give the necessary Rabies and Feline Leukemia vacinations, she was given the name of a lady veterinarian, who was giving up her fulltime practice and going partime on a limited basis due to her own health issues. M told her about @Catsalady's situation.  The lady vet said she would be more than willing to go to @Catsalady's house and handle the needed shots, but she would not be back in Phoenix until March 15th.  M told her she'd keep her name just in case the moving date was delayed.  At the time, we were thinking @Catsalady would be moving about the 16th.

Well, when M found out @Catsalady wouldn't move until the end of the month, she called this nice lady vet back. She said she'd be happy to give the shots and maybe even give a break on the price!! Well, we were so estatic dat I started chasing my tail again.  (Yes, I'm a cat, not a dog, but I get happy too.).

M talked to @ForeverGinger, as she is in charge of the donations that were given by so many kind anipals and their oomans. The donors had already told @ForeverGinger to use the funds toward whatever was needed to provide the kitties with a good home. Because this nice vet is not going to charge as much as was quoted by the only other mobile vet, there should be money left after the lady vet has been paid.

@ForeverGinger suggested that the extra funds could then be applid to the fee that the assisted living facility charges people to have an animal live with the resident. (Stupid rule if you ask me, but what do I know -I'm only a cat and don't know about dat money or rule stuff). M and I both thought dat Ginger had a fabulous idea.   So, we  voted "YES" immediately.

@ForeverGinger is contacting the lady vet to make arrangements to pay her.  M has emailed @Catsalady the lady vet's name and phone number so she can schedule the appointment.   It's like the purrfect ending to a fairy tale - well, maybe not quite dat happy.   I'm sure @Catsalady would rather have her own place, good health, and all her kitties back again.  But this is the next best thing to a purrrfect ending.

Well, friends dat's where the real life story of @Catsalady and kitties ends for today.   Stay tuned for my next post for a hopefully happy ending . Meanwhile, let's all celebrate and do the HAPPY DANCE with @Catsalady, Abby and Gwim.
Posted by Mariodacat at 1:11 PM

YIPPEE!!!! Oh what great news this is, I'm dancing with ya buddy!!!

ooh, a balcony and storage sounds like it's really a nice place. :) Hope all will be happy there :)Glad everything's turned out ok :)

This is such wonderful news! I hope they will be very happy in their new home. Joining you all in the HAPPY dance!!

I'm so happy for her. I wonder if she needs money to pay someone to get a truck to help her move. She didn't seem to know how she was going to move her things after her aides helped her pack so if any anipals in the AZ area have a truck and can help her ....

Yeah! I'm gonna start doing a happy dance, too. This is great news!

That's wonderful news, Mario! I think it's cute that you chase your tail. My kitty, Topaz, does, too :-).

I join you in the happy dance. I so happy they be with her.

Glogirly and I have given you a special award! C'mon by and check it out. : )

This is all so great! I remember when she was worried about a facility that would take her kitties, too. I love when things work out!

Excellent news Mario - sounds like everything is working out really well.