I knew those things called suitcases meant bad news. Yup – my peeps left me for 2 whole weeks and shipped me off to my sisfur’s house to live with her husband (I’ll call him Bro) and their two cats (Missy Hissy Keiko and Big Guy Amos) and their two gerbils (Cena and Pronzo). 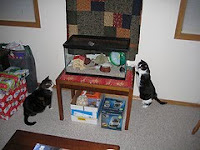 Missy hissy on the right and Big Guy on the left watching their gerbils.

I hate to admit dis, but it really wasn’t so bad being there. In fact, I did have some fun. The gerbils were extra fun to watch. They are such busy little guys.  At one point I even stood on top of the screen protecting their box from us kitties. He he – I got yelled at tho cuz I was scaring the gerbils. The gerbils have no fear of cats, but their natural preditor is a birdie. So, when I planted myself on top of their cage, dey thought I was a birdie out to get dem. I really didn’t mean to scare dem – just wanted a better look. So, Bro yelled at me to get down.

It's okay if I watch them like shown on the righthand side.  I don't scare dem this way. 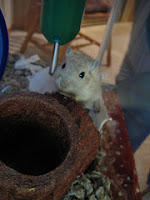 Cena on the left.  (His name means lunch in Italian, he he) 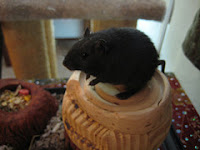 This is Pronzo on the right (means dinner in Italian). 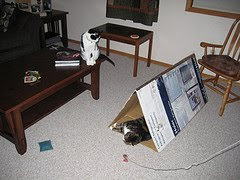 This is Big Guy and me.  You can see, we kinda want to play, but not quite used to each other yet.  Big Guy and I got along fine – he’s quite nice and we played bat bat a few times. Nothing too hard tho cuz he is a senior citizen (M told me to say dat - whatever it means). I even took a couple of pieces of kibble out of his dish while he was eating. Bro thought I’d get my nose swatted for doing dat, but Big Guy didn’t mind at all.

Big Guy could beat me up if he really wanted too, but he’s a very gentle, loveable guy. In fact, he and I even shared sisfur’s lap one day. Big Guy was there first. Sisfur saw I wanted to get up there too, so she invited me up, but said I had to share cuz Amos was there first. I did settle down for a couple of minutes but couldn’t get comfy because Amos is so big and hogs the whole lap, so I left. Big Guy didn’t care at all. (M says you should not feel too sorry for me cuz I still got plenty of lap time on sisfur’s lap when Big Guy wasn’t there.) (Bro also let me sit on his lap while he was at the puter). 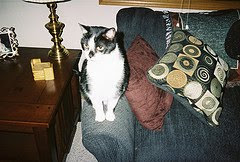 Then there is Missy Hissy, who lives up to her name.

Sisfur told M dat Missy Hissy kept looking at sisfur with those purdy, pleading eyes that said “Isn’t he ever going to leave?” Fortunately for me, Missy Hissy sleeps on susfur’s bed most of the time and only comes out for meals. But whenever she and I were in the same room, she let out a big hisssss. It was funny tho cuz whenever Bro got the string out to play with me, Missy Hissy would come running to play too. So Bro got quite good at making us take turns with the string. Den when we were thru playing string, Miss Hissy would let out a big hisssss again! Sisfur said I was a good boy and didn’t stalk Miss Hissy once while at their house. He he – I’ll save that trick for when they come to my house – on my turf!

You probably are wondering where I slept.  Well, with sisfur and Bro of course - where else would a friendly guy like me sleep.  Missy Hissy was down by their feet on her blanket, so I had plenty of room.   Big Guy has a touch of arthritis now, so he doesn't like getting up on the bed anymore, even with a stool to help him.

I really did have a great adventure afterall.  I wouldn't mind going back again some time.  he he - I not sure sisfur agrees with dat cuz she told M & D dat I is a high-maintenance kitty (whatever dat means) because I want constant attention.   DUH - Well, what else should be expected of me since I was in a shelter for 2 months after I was found wandering the streets.   I just love my peeps and being around dem.

Now I promised M some air time cuz so many of you had asked about their vacation.  The next post is hers.  Read on ........
Posted by Mariodacat at 4:16 PM

Wow, Mario it sounds like you had a grate adventshur wif gerbils fur entertainments and all.

Mario...you had your own vacation!!

Mario, you so handsome perched up looking at gerbals. I am so happy that even thou we apart that you did has a good time there. We always has paris and always has here. I so happy you my boyfriend. I love you. xx

We are SO happy you're back!!! How could anyone resist your charms my friend, sounds like you had the humans and the big guy wrapped around your paw (leave Missy to me, hubba hubba!!)

Wow -- are those gerbils sort of like squeaky toys???? *snickers*

Glad you had a good time & that Missy Hissy wasn't too mean to you, friend!

Excellent adventure Mario.
How kind of your hosts to lay on entertainment in a glass stage for you to watch.

Hi Mario, we saw you over at Katie's comments and wanted to stop by. I can't believe we haven't met before. We thought we knew all the cats in Whisk-onsin. Anyway, a belated welcome to our cat blogging community.

We have a lot of similarities. We look alike, ('cept for my painted nose), we both live where it never stops being cold (well, almost never), and I have a sister named Misty!

Stop over and see us some time.

PS. You are both a tuxedo AND a jellicle cat, since both refer to black & white cats.