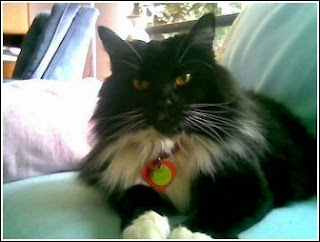 Today I wants to pay tribute to my very special friend, HollieCatRocks, who crossed the Rainbow Bridge on November 26th - the day after Thanksgiving.   Anyone who was fortunate enough to be Hollie's friend, had a true friend for life.   She was always willing to listen anytime to whatever might be bothering you.  he he - dat's probably why she was always landing in DM jail on Twitter.

Hollie and I even dated for a couple of months, but den decided to go our separate ways.   I has a roving eye and love all the girls and have no intention on settling down.   Hollie always had a special fondness for SamTheCatRocks before he crossed the bridge.   But we have remained very special friends, and I still love her as a friend.   I was very happy when she and Sammy decided to get married.  he he - a little shocked when they told me the news, but very happy for them, and they are very happy together.  Dat's makes me happy to.

The day before Thanksgiving I contacted Hollie because I hadn't seen her on Twitter for a few days and dat was very unusual.   It was then that she told me her wasn't feeling well at all, she was very thin, hadn't been eating, and her mama was very very worried bout her.
Den when my peeps got home from going to sisfur's house for Thanksgiving Dinner, I contacted Hollie and learned she was indeed very very sick and couldn't get better.   Her mama was going to help her cross the bridge the next morning because she loved Hollie and didn't want to see her suffer.
Now this amazing girl said not to be sad for her because she was going to be very happy going to OTRB because her beloved husband SamTheCatRocks was already there and waiting for her and so was one of her wee ones - ChiChi.   Leave it to Hollie to turn this into some very positive.   So, the picture below reflects how I picture her now - on a picnic with her supportive husband (SamTheCatRocks), her wee one (Chichi) and her very good friend (Rosie - or @MedusaJ on Twitter), who crossed OTRB in June.   So, dear readers, I hope you will picture her this way too because Hollie is very happy and wants us all to be happy for her. 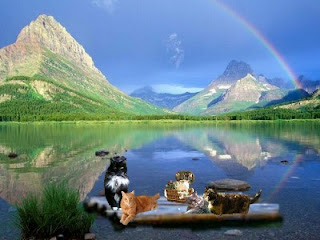 I was so thankful dat I was able to have a chat with her before she crossed to tell her dat M amd I loved her, that she was a very dear friend, we would miss her, were happy for her, but sad for her mama.   We don't very often get the chance to say temporary goodbye to our dear friends.   I say temporary because I know we will meet again someday when I has to make the journey.   (M says I'd better not do dat for a lot of years yet).   We love you Hollie and always will.

Please stop at Hollie's bloggy where she left an amazing post about her crossing and happiness.   Leave a comment too because her mama (who is very sad) will appreciate it.    http://hollieferguson6.blogspot.com/

Now we are very fortunate dat on Twitter many of our friends who have crossed the bridge hop on the teleporter dat transports anipals dat have crossed dat bridge back to visit us..  So, we still gets to talk to her and Sammy, and sometimes they even come to #pawparties.   So, we know we will get to see dem again, when they are ready to visit us.

To Hollie's mama - M and I each gives you a big HUG.  What you did for Hollie was the last loving gift a ooman could give to their dear suffering anipal.  It took strength and courage and Hollie will forever be grateful.

Mario
Posted by Mariodacat at 9:48 PM

We didn't know Hollie but we are very sad for her and her family, and you too, Mario. It was wonderful you got a chance to say "Au Revoir".
We will stop by Hollie's blog and leave our respects.

Dear Mario,
That was a beautiful tribute.
A big HUG to you from Cousin Pixel and me.
Love,
Lea

I remember seeing Hollie around....I didn't know she used to be your girlfriend Mario!
She was a beautiful kitty....I was sad when I first read this but because everyone she loves has crossed the bridge then as you said she will be happy.
This was a beautiful tribute my friend!

What a truly loving tribute to our very special Hollie. Paws to heart and hugs to you and M, my sweet friend Mario.

I can see Hollie, Sam and ChiChi having a picnic just like you pictured; Hey, she even drops food down from OTRB; sometimes even doubles of everything! It is heavenly! xo

Mario, that's a beautiful tribute to a beautiful kitty. I'm so sad for Hollie's parents. I'm very glad that Hollie is still tweeting from OTRB. And leave it to Hollie to see the silver lining in everything!

Oh Mario, that is such a nice tribute to your friend Hollie. It sounds like she was a good friend and a super kitty. We will go visit her Momma. Take care and have a great week end.

*wipes tears* Oh Mario that was a lovely lovely tribute....the picture was just gorgeous too. You were and always will be a great friend to Hollie.

We didn't know Hollie, but we're sorry that she has gone to the Bridge. We send purrs to her family and all of you who are missing her so much.

Mario,
A beautiful tribute and I really liked the photograph of Hollie and her fur family together!

What a lovely tribute!

Big hugs to you Mario and M. Sammy and I love you and we thank you for your frienship. I was laid to rest this weekend, with Sammy, our famblys by our side in the country where it all began. Thank you for a lovely tribute and you are right, it is paradise here, I am with Sammy, our chichi and mai sister Rosie..we are all happy, free of pain and can run run run....ps...HB is right I send him food daily, that good god, Sumo might come out again soon! xo