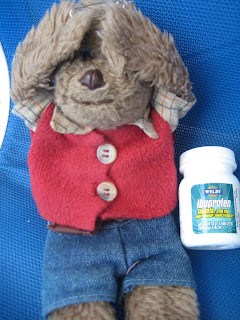 Poor Lippi - he told me he had the worst headache the next morning.   It's a good thing he was spending the day on ship cruising to Glacier Bay National Park, Alaska because he didn't feel like moving much.  It was a good day to sit on the balcony and watch the world float by and take a nap or two, or three, or more.

Mario's mom here - The ship sailed up a 20 mile long channel into Glacier Bay.   A Park Ranger from Glacier Bay National Park boarded the ship and explained things along the 20 mile ride.  At one time the glacier ran the entire length of that 20-mile strip.     Here's a googled map showing the route - we were in the channel on the back side of the park 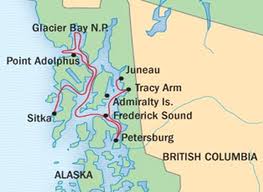 Lippi said it was getting colder the deeper they traveled through the passage into Glacier Bay.   The fresh air cleared his hangover tho! 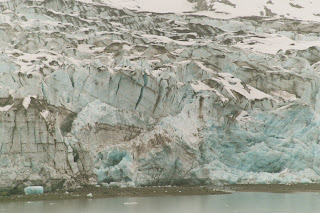 Look at all those pretty colors too!   Awesome! 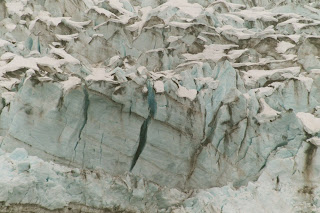 B O O M !  Lippi said a chunk of ice fell off into the water, making such a loud boom that it scared him so much he jumped way up to the ceiling and banged his head.  It was so scary! 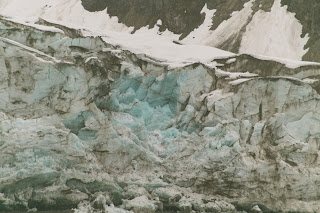 Here you can see where some has already broken off and slid down hill. 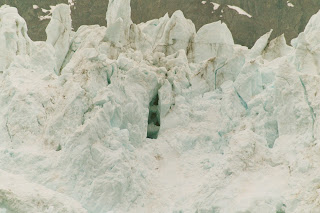 ﻿This glacier has a big hole in it.   M said she doesn't want to be on the water when it finally cracks and falls into the sea.  It may create a wave so huge it can be seen in China!  he he (she's just kidding.) 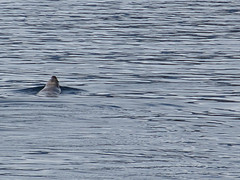 Sailing back out of the channel into Glacier Bay and towards Skagway, Alaska - lots of sea lions (above pic) and Sea Otter were seen frolicking in the water.
Lippi was so tired, he said it's time for bed now.  I'll be back again tomorrow with Part 4.  (We have about 2 or 3 posts left, so we hope we aren't boring you too much!)  Lippi  hopes you'll be back too.
Mario
Posted by Mariodacat at 9:01 AM

We'll be back, I'm enjoying the Lippi adventure...except for the cold part!

Our Mummy loves travel logs and we are enjoying seeing Lippi!!!
Purrrrs, KQ

WE are enjoying all this great info on Alaska and seeing all the pictures. It is terrific. Especially since Lippi is helping with the tour. Good stuff. Have yourselves a fun week end.

Never boring dear furriend. Can't wait for part 4! This is so exciting.

You couldn't bore me. Looks like Lippi had a blast! It's a shame what global warming is doing to those Glaciers.

Not boring at all, I love Lippi's Trip!

Ur pics are fantabulous! I showed them to my peeps b/c u know how much they love to travel. They oowww'd and aahhh'd over them and said "Keep 'em comin'!" We're really enjoying it. :)

omaigoodness that iz such an avenchure Lippe (an yer mom) are having. Those glasherz iz skardy looking, I wud jump too when it makes lowd noize.
i can't wate for da rest of your bloggys on this xciting trip!

Lippi ROCKS! How fun does that look, I want a bite of your cake!!!

Wow, Lippi! You sure are having a great trip!!

The Ice fall look so cool !!!!
Enjoy your trip, Lippi

Oh wow Lippe does get around doesn't he and its reassuring to see him with cake same old Lippe!

What fun for Lippi to be there.

My humans were there exactly 2 years ago. Brings back wonderful memories. They were not on a cruise, but they took a day boat trip into Glacier Bay.

Hi we are Jake and Elwood. Our blog is called Royal Ruskies. We stopped by for the party and really loved your pictures and stories so we are now followers too! We love making new Kitty friends this is so much fun!!!!!

I think Blogger nommed my last commenty. GRRRRR. I think wot I woz woofing woz that I is glad I woz not there when that ice falled coz I would has jumped out of my furs. I bet Lippe's headake commed back when his head hit the ceiling!

Oh Lippi is having a wonderful trip!! These photos of glacier is great! I love the blue color of ice - so beautiful!