What is Super Bowl Sunday

So, I asked M what is Super Bowl Sunday.   She said it was when the two top football teams in the US battle it out for the Lombardi Trophy on a Sunday in February.

Dat got my imagination going: 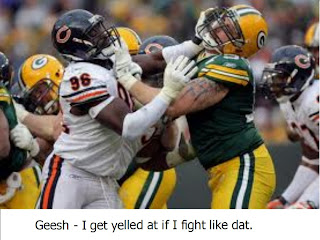 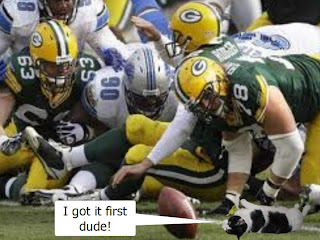 Den der is some guy named Aaron something.   Guess he is a "good dude."  Don't know what dat means, but I could play just a good as he does I bet.
﻿
﻿
Geesh - you can't even nom it!

I still don't understand what all the fuss is about.   I am mad at M tho cuz she says she won't type for me on Twitter Sunday evening cuz she's watching the game.  Bummer.
She says we have to support our local Green Bay team and be proud of dem for working so hard to get to play in dis game.

Just to make sure I'd watch the game with M & D, she got me dressed for the big game. Dis dumb cheese head isn't very comfortable, so I can't wait to take it off.
or,

Maybe I should go with my buddy Tiger of @TheNascarKitty to the game.  We'd have fun cuz he's from our state too.

Or maybe I should just watch the game too in a lap - preferably D's lap. 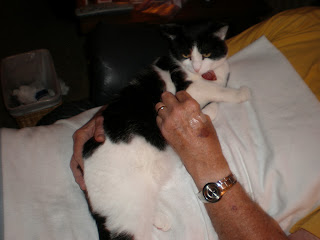 Well Pals, See you all after the game.   I told all my Twitter pals dat if our team won, we'd throw a pawty right after the game.    he he-  I also said daf if out team lost, they wouldn't see us - we'd be "licking out wounds."   (I don't know what dat means, but I hear my doggie pals talk about licking their wounds" and sometimes the oomans say dat too.
Oh - to my pals living in other countries - he he I'll be especially looking forward to  your comments and dis hoopla la.   At least in Soccer, you don't all pile up on each other in the field - or do you?
Mario
P.S.  - Darn typist kept publishing before I was ready.   Need to hire a new one one of these days.
Posted by Mariodacat at 2:58 PM

Good luck, we izn't picking a team but i hopes yours win so you iz happy an can celebryt!

We'll be watching too Mario, I love to see those silly humans running into each other...just like us when we zip through the house!

SUPER Mario in his SUPER bowl!! Rumblemum would watch that any day!

Oh MARIO! You look so impawtent in your uniform!

I like your cheeshead but I bet it's a little uncomfortable but wear it for mommy, MOL.


My mom was laughing so much at that picture of you saying you had the ball! I thought you looked MIGHTY!!! What a man cat!!

Hey, Unkle Mario. It waz nice having u 2 vizit wid us last week, even though Keiko had 2 be all hissy about it. Where did you get dose Packer booties? I sure like 'em. Gotta go, it's 4pm so I gots ta warsh my paws and start meowing for dinner. Can you help me find better staff, cuz mine don't spoil me enough?

Mario, you're a cheesehead with his (is it bacon!) beer! haha! You're prepared! Have fun tomorrow! :)

Our team is the Lions. Saddest. Team. Ever.

Gonna be close. Green baby is incredible this year as steelers are will be close one! I hope packers win, would send GB into frenzy MOL talk to you soon xoxo

Mario, we like the Super Bowl because our humans usually eat lots of good foods like chicken wings and nachos and we hope we gets some!!

We're rooting for the Packers because they get their name from meat packers and they call their fans cheeseheads...we like meat and cheese!!

u nose which team i'll be rooting for - Let's Go Steelers!!! xoxo

Mario our momma cat says pphhttt to football! She has to cook lots of nomms on superbowl day for daddy cat. I hope you get some good nommmmmmms.

You look catastic in da football uniform, and I love ya bunnykickin da ball. I don't know what trophies are good for either, they are just dust catchers and dust isn't good either.

Mario, what a great post. All of my anipals enjoyed listening to it and we all loved the pictures. You're so cute with the cheese head.
Good luck to your team tomorrow in the big game.

Well, if you want to play hooky from football for a little while, Mario, you know you can stop by my place for a niptini!

You can't even bunnykick the ball?! That's very silly indeed - humans... We'd rather watch you in that awsome bowl in the first picture all day.
Purrs,
Siena & Chilli

I sooooo loved this post Mario!!!! You did such a wonderful job and I love YOU posing in the "super bowl!!"

I am sorry though, I have to root for Pittsburgh (please don't hate me!) I lived there from age 2 til age 7....my fave team are the Browns (who will NEVER get to the big game) and now that I am Michigan I root for the Lions too...but having lived in the great city of Pittsburgh it is Pittsburgh for me!

May the best team win!!

Mario, you're really getting in the spirit! I agree about the trophy: what good is anything if it's not nommable!

Have fun and we'll be either celebrating or licking our wounds, later, too!

Love your cheessehead Mario and also the picture of you in the bowl. Looks like all of you are ready for the Super Bowl. We just hope the best team wins. It sounds like it is going to be a good game. Take care and have a great day.

What a fun post. I wish I could do those neat things with piccies. Believe me, Europeans go twice as nuts over their "World Cup" of soccer. Lots of violence and people singing their team's song.

Gotta say GO PACKERS! for my Pop. Just don't riot and burn down the city when they win. HAH!

Mario, these photos made me laugh so hard!! I especially love the 3rd photo. And you look so handsome in the uniform with cheeze head...LOL.
I hope you enjoy the game!

Hi Mario
Love your posting about this super bowl. M says your Green Bay Packers are a good team but she doesn't usually watch football. We did watch the puppy bowl - awesome!
I think you should teach the team the back kick - it could help them.
purrs and hugs to you and M and D!

Mario you are my hero.....GO GREENBAY

Mario, I just found your blog this morning (via twitter! Twitter recommended you as someone I might want to follow) and I just wanted to tell you how very VERY much I've enjoyed it. In addition to your own wise and witty catly musings, the site is chok full of resources...what a lot of work you do! Very nice to meet you, and please pass on to your human the message as well...heh....when you wake up from your nap, that is.