This is M talking. Many of Mario’s friends on Twitter have asked about our trip and want to see a few pictures. We didn’t take many pictures because we’ve been to all the islands a few different times. I won’t bore you with more than 4 as I’m just sharing a little of Mario’s blog.  I basically wanted to share what had happened at the end of our trip.

We flew to Charleston, South Carolina – a beautiful, historical city for those of you who have never been there. It snowed 2 inches our first night there – here we were trying to escape the cold and snow. The local people were having so much fun with us because it never snows in Charleston – this was the first time since hurricane Hugo. Coming from snow country ourselves, it was quite amuzing to hear everyone make such a big deal out of it. Two of our three guys even built a small snowman for the waitress that served the continental breakfast each morning. 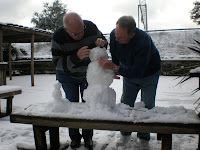 Here's a picture of Don (on the right) and our friend (on the left) having a great time building that snowman the morning after the 2 inch sowfall.  You'd think we had never seen snow before!

We spent 2 delightful days driving around to the various beach communities. One couple in our group has spent quite a bit of time in Charleston, so they made good tour guides and had rented a van so we could get around town. 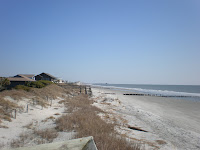 The beach on Foley Island, South Carolina.  notice the touches of snow still lingering after 2 bright sunny days.  We were freezing in our sweatshirts and light jackets with the strong north wind blowing.

On Monday we boarded the Mercury ship, owned by Celebrity Cruise Lines (now owned by Royal Caribbean). Our port of calls were the islands of: Puerto Rico, St. Thomas, St. Maarten, St. Kitts, and Tortolla. 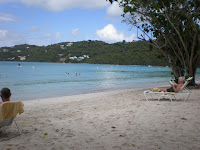 Here is a picture (righthand side poto) of beautiful Megans Bay on St.Thomas  - voted one of the top 10 beaches in the world.  (my most favorite place).  No, that isn't me (Mario's mom)  in the chair.

Now keep in mind that we are old (ancient, in fact) people. We didn’t even get off the ship in Pureto Rico or St. Kitts. We have been to those two islands many times, have seen everything we want to see, bought everything we want to buy, and taken all the tours we want to take. We just enjoy cruising and it’s a very economical way to take a restful vacation and escape the cold, snowy north (most years anyway).

At St. Maarten we went to another beach and relaxed, read, and listened to the waves pounding on the shore.  Heaven for sure. 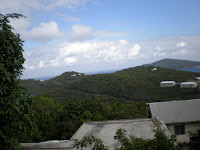 Here's one picture of the drive to the beach in St. Maarten.

Our last island to visit was Tortolla. I was really looking forward to seeing that island as we had never been there before. We had a half day tour scheduled while our friends were going to a beach. Don woke up that morning with the flu bug – or so we thought. After calling the ship’s hospital, we found out the Norovirus had become active on the ship. Don was confined to his cabin for 3 days. I cancelled the tour we had planned so I could watch over him and make sure no complications set in.  Also, I  figured I’d probably end up getting it myself and wanted to stay close to the bathroom.  I did come down with it – the next day. Each of us was confined to the cabin for 3 days as it is highly contagious. We were lucky that it didn’t hit us both at the same time – would have been difficult with only 1 bathroom.

Fortunately, after the stop at Tortolla, we had 3 sea days to get back to Charleston, so we didn’t miss much except good meals, fresh air, and the company of good friends.

After the cruise line realized they had an outbreak on their hands, they announced that all sick people had to report via telephone to the ship hospital and be quaranteened to our individual rooms for 48 hours after the last symptom was experienced. Apparently, you can still spread the virus up to 24 hours after your last symptom. Cabin Stewards were at our beckoned call, room service was available 24 hours a day with a menu plan designed by the ship's doctor and captain especially for those of us recovering. I do not know what more they can or could have done in a situation like this.

I do not know how many passanger were ill.  We heard media reports of 300 to 500.  I do know that some of the crew also got it.

I wanted to share this story because I think sometimes the media slants the news just slightly – sometimes negatively aimed at the cruise line – whatever line it may be. It’s a good reminder for all of us to simply stay home (or in your cabin if on a cruise) if you are sick.    It's not so bad being quaranteened - the first day you are so sick you only want to be in bed anyway.  The second day you still don't feel that great and are content to sleep most of the day.  By the third day, the cabin is getting smaller, but you realize the end is in sight.  It kind of like being in cruise-ship jail - much like Twitter jail when Mario talks too much.

Mario’s next post will be an update on Perodacat and Mamacat's adopotion and the status of Pero's siblings. Mario said he hopes to do that in 3 or 4 days after transportation is found for Abby's transport to her new home.
Posted by Mariodacat at 2:17 PM

Email ThisBlogThis!Share to TwitterShare to FacebookShare to Pinterest
Labels: Mom and Dad's Vacation

Shawnee's mom here: That is horrible that you got sick and missed part of your vacation - especially the part you had not done yet. Such a bummer! Well, it's an excuse to go again sometime, right?

That was too bad about getting sick on your vacation. Hope you can go back sometime later........ Not too soon because we're glad to have Mario back with us. SeattleP

This is Hollies Mama here: I have taken over for a minute. What an awful situation of that outbreak on the ship, glad you are all okay.

I am so glad you are OK now - being sick is no fun, and even less fun if you are on vacation!

We did hear about the outbreak on the news. We had no idea that you guys were on THAT cruise. Your attitude about it is very gracious. We're very happy that Mario allowed u some space on his bloggy to tell us about your trip. Nice to hear how his 2 weeks went as well. We did miss him.

I heard about it on the news in NYC. I'm glad there were no complications and that you enjoyed the rest of your cruise.